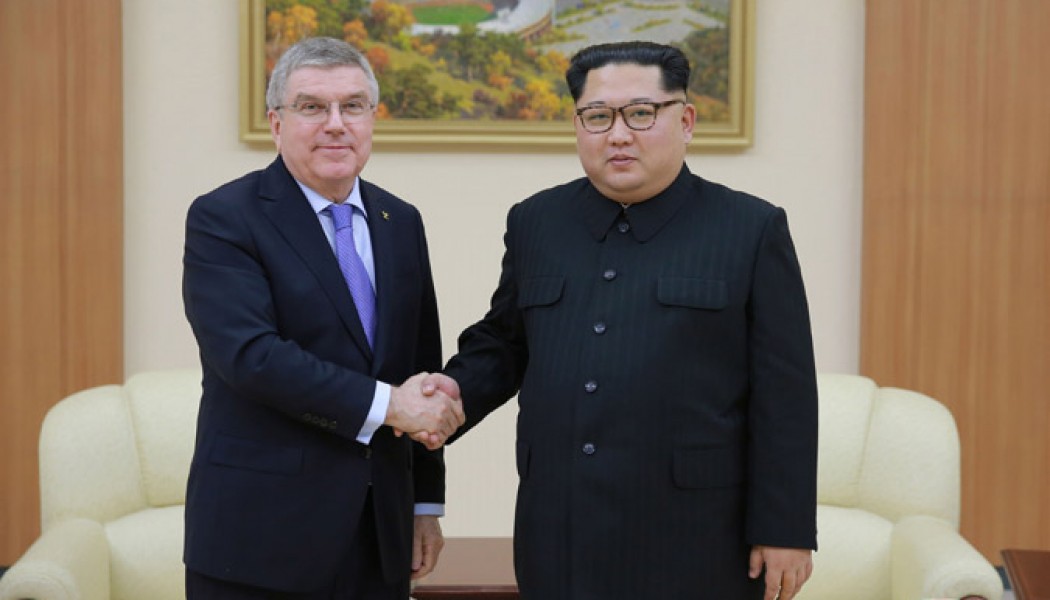 Pyongyang, March 31 (KCNA) — Kim Jong Un, chairman of the Workers’ Party of Korea, chairman of the State Affairs Commission of the DPRK and supreme commander of the Korean People’s Army, received Thomas Bach, president of the International Olympic Committee (IOC), and his party on a visit to the DPRK.

Respected Supreme Leader Kim Jong Un met the IOC president and had a souvenir photo taken with him.

He warmly welcomed the IOC president’s visit to the DPRK and had a talk with him in a warm and friendly atmosphere.

The IOC president said the purpose of their visit to Pyongyang is to express the most heartfelt thanks to respected Chairman Kim Jong Un of the State Affairs Commission for his contribution to making the 23rd Winter Olympics successful ones symbolic of peace.

At the Olympics the teams of the north and the south jointly entered the venue of the opening ceremony in the Olympic ideal, competed in games as a single team for the first time in the history of Olympics and thus showed the whole world their will to achieve peace and reconciliation and made the Olympics the ones which evoked the greatest emotion, the president said.

He expressed his will to make sure that the IOC would cooperate with the DPRK in the long-term preparation for its participation in the 2020 Tokyo Olympics and the 2022 Beijing Winter Olympics and greatly contribute to the development of sports in the DPRK by proactively using the international sports arena including the Olympic forum with his Pyongyang visit as a momentum.

The Supreme Leader thanked him for it and said that he was very thankful that the IOC paid special attention to the DPRK players’ participation in the 23rd Winter Olympics and made active cooperation while taking special measures beyond rules and precedents.

Noting the Winter Olympics were not only successful ones as Olympics but also ones of special significance which opened a new chapter of concord between the north and the south, he said that the once frozen north-south relations greeted a dramatic thawing season with the Olympics as a momentum and it was totally attributable to the efforts of the IOC which offered an opportunity and paved a path for it.

Expressing deep thanks to the IOC for having sincerely cooperated with the DPRK, regardless of any political climate and conditions, he hoped that the positive and proactive cooperative relations between the DPRK Olympic Committee and the IOC would as ever favorably develop.

Explaining the IOC president about the sports policy of the DPRK and its prospect, he said he expects close contact and excellent cooperation with the IOC in further developing and improving various sports events including winter sports events in line with the world trend.

He warmly invited the IOC president to frequently visit the DPRK as a friend.