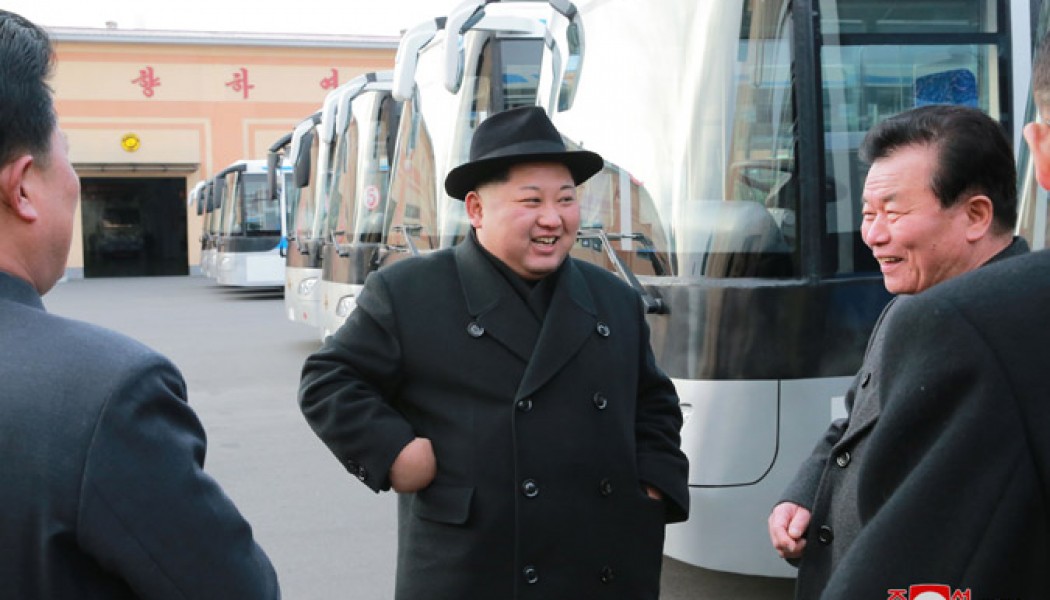 Looking at the factory with a bright smile on his face, he said that all buildings are neat and fine and environment around the factory is clean and it can be felt that much effort was made to do so.

He went round the room for education in the revolutionary history and the room dedicated to the history of the factory.

He noted that the Pyongyang Trolley Bus Factory was founded thanks to the noble intention of President Kim Il Sung who set forth a policy of operating trolley buses in the capital to make its citizens live in a cultured way in the pollution-free city.

He said that the pictures of the President watching “Chollima-72″ type trolley bus in May 1972 and of leader Kim Jong Ilwatching a large bus “Kwangbok Sonyon” in April 1990 reminded him of their devotion and efforts made to solve the traffic problem of the capital city.

He said that the officials and workers of the factory should bear in mind the honor and pride of working at the glorious worksite associated with patriotic sweats of the great leaders and their love for the people and make constant innovations and continued progress.

Going round processing, electromotor, trolley bus assembly and overhaul workshops and other parts of the factory, he learned in detail about the modernization and production.

He watched new-type trolley buses produced at the factory.

In the trolley buses he learned in detail about their performance and quality of fittings. And he said that they are a proud product of the Korean workers’ revolutionary spirit of self-reliance and he is encouraged and pleasant to see them, adding that Kim Il Sung and Kim Jong Il would have been very glad to see happy citizens going to and from worksites aboard new-type trolley buses.

He stressed the need to better the design of trolley bus, create its mark in a peculiar style and coat it more presentable and make fittings as required by the people so that they may not feel inconvenience and thus make the trolley bus, a mass transport means, represent the looks of the capital city of Pyongyang.

Saying it is his intention to turn the Pyongyang Trolley Bus Factory into a world-class trolley bus producer, the Supreme Leader set the goal of second-phase modernization to be attained by the factory and took a benevolent measure for it.

Expressing expectation and belief that its officials and workers would fulfill their duty in the work to attain the new goal set by the Party, he had a photo session with them.

Accompanying him were Vice-Chairman O Su Yong and Vice Department Director Jo Yong Won of the Central Committee of the Workers’ Party of Korea. -0-