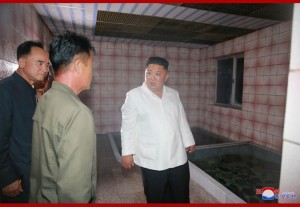 He visited it late at night and acquainted himself with its management, operation and situation.

Looking round the bathroom of the camp, he pointed out its very bad condition, saying bathtubs for hot spring therapy are dirty, gloomy and unsanitary for their poor management. If the camp draws criticism by the people instead of their favor due to such poor operation and management though it is holding a signboard indicating that it is a building visited by President Kim Il Sung and leader Kim Jong Il, it will commit a sin of bringing to naught the exploits of the great leaders who built a holiday camp for the people before anything else in the scenery place where hot spring water is gushing out all the year round, he said.

He asked the chairman of the Kyongsong County Party Committee about the output of hot spring water and its temperature at the point of gust and accommodation capacity of the camp and the number of rest-home visitors, and gave a task to modernly and newly build the camp.

Calling for sprucing up the area of the camp which is famous for spring water in the country to be a peculiar resort which meets the convenience and growing cultural and emotional demands of the people at the best level, he said he would make sure that the People’s Army would excellently build it next year and present it to the people as a gift.

He said the camp should be built excellently to be an all-round service center, therapy center with all catering establishments so that people can enjoy full rest and spring water therapy during their holiday, adding its design should be worked out in a peculiar manner to meet the features of the spring water area and thus build the camp into a model of the spring water holiday camps without an equal in the country.

Having a talk with the chairman of the Kyongsong County Party Committee, he asked him about the work of the county party committee and the work it plans to do in the future, he gave precious teachings for developing the county in a peculiar manner.

Noting that the county has fields, mountains and a sea and good traffic conditions, he said that as it has some foundation for developing industry, agriculture and fisheries, the county party committee should study and work hard for the earlier development of the economy of the county which has favorable natural and economic conditions.

He expressed expectation and belief that the county party committee would bring about a decisive turn in the struggle for turning the county into a marvelous one good to live with its own efforts by inspiring the people in the county to the drive for implementing the party policy.

He was accompanied by Hwang Pyong So, Kim Song Nam, Jo Yong Won, O Il Jong and Kim Yong Su, senior officials of the Central Committee of the Workers’ Party of Korea.