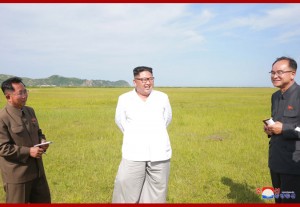 Kim Jong Un has given his whole mind to sufficiently supplying the vegetables to the people by massively cultivating them of various sorts even in the northern oceanic climate more unfavorable than the plain area. He went to the spot with the idea of building a large-scale vegetable greenhouse farm in the sector of an air force regiment in Jungphyong-ri to be removed according to a decision made by the Central Military Commission of the Party, personally learned about the site and clarified the long-term plan for building a huge vegetable greenhouse farm.

Looking at the vast land of the sector in an airport, he said that if we build a vegetable greenhouse farm of one hundred hectares, it will be splendid, and such area of the greenhouse will fully meet the needs of the people in the province. He expressed great satisfaction, saying he is very pleased today and that he is most pleased when he does a worthy thing for the people one by one like this.

Saying that the People’s Army should build the farm at lightening speed as it is the first gigantic and large-scale construction in the country, he stressed that it is necessary to build it at the highest level while ensuring both construction speed and quality as it is the farm to be provided by the Party with firm determination, not sparing the investment for the people in North Hamgyong Province.

He called for building the farmers’ residential area and cultural and welfare establishments in a modern and civilized way and thus successfully sprucing up the farm village as a model of socialist rural cultural construction and socialist paradise in which it is nice to live and work.

He was accompanied by Hwang Pyong So, Jo Yong Won, O Il Jong and Kim Yong Su, senior officials of the Central Committee of the Workers’ Party of Korea.