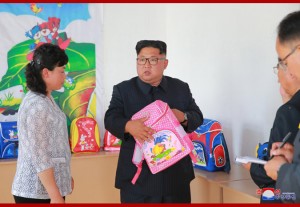 In recent years he established production processes of materials for manufacturing bags including cloth and zip capable of satisfying the needs of the country one by one and, on the basis of them, set forth the task for pushing ahead with the work to successfully build an independent factory for production of schoolbags in every province and to mass-produce and supply bags of good quality with supplied materials as an important policy.

However, the North Hamgyong Provincial Party Committee did not sincerely accept the Party’s policy on newly building a bag factory in line with the capacity while disregarding the work initiated by the Party to provide all necessary things for the schoolers with our own products, giving top priority to the education for the generations to come. It offered shabby rooms of the building at the Chongjin Regenerated Fibre Factory for a bag production base and thus caused great anxiety to Kim Jong Un who came to the factory to learn about the bag production in localities.

The Supreme Leader pointed out that the Provincial Party Committee is working in a perfunctory manner, disregarding an important policy to be prioritized by it and that its attitude toward the acceptance and implementation of the Party policy is very wrong and the committee has no revolutionary spirit and responsible attitude of working hard to implement the Party policy.

Looking round the sample room of the factory, he said that the factory’s level of producing bags is high though its production began one and half a year ago and the skills of its employees are high and that the bags are diverse in color and size and they were well made with much care according to the ages.

He said it is necessary to make the shoulder straps of bags with thicker sponge, noting that they should be made with twice thicker sponge than now so that their users may not feel pain

Stressing the need to strive for further raising the quality of bags, he said that the central factories responsible for production of raw materials should produce the accessories of bags such as cloth, zip and tape with locally available materials and ensure their production on a high level.

He called for qualitative and meticulous sewing to produce quality bags so that they should not get unfastened or ripped though children and pupils handle them at random.

It is necessary to further reduce the bag production cost, he said, giving an instruction to reexamine the price of school things including Mindulle notebooks and bags being supplied to pupils.

Saying that even though the state has more burdens, it should not give inconvenience to the people, he stressed it is needed to correct the price after listening to the view of inhabitants.

He charged that there is a problem in the work of the Provincial Party Committee as it has not yet built a design room, paying no attention to a poor products show room.

Noting that he gave an instruction for provincial party committees to build a schoolbag factory in a responsible manner in every province and learned about the construction of bag factories in some provinces and they are considerably different in level, he said such difference should be considered as a gap in the officials’ ideological attitude toward the Party policy, not difference in the economic power of provinces.

The overall economy of the country can vigorously progress when North Hamgyong Province with great industrial potentials stands up, he said, expressing belief that the Provincial Party Committee would rectify its faults as soon as possible and wage a dynamic struggle for implementing the Party policies and thus build up the province into a reliable key industry zone of the country and bring about a radical turn in improving the people’s living standard.

He was accompanied by Hwang Pyong So, Jo Yong Won, O Il Jong and Kim Yong Su, senior officials of the Central Committee of the Workers’ Party of Korea.